Yesterday, I spent most of the day working on a chapter for the new book I’m writing and by late afternoon, I was focusing on a gentleman whose name was William Buchanan (1738-1813). Mr. Buchanan is not directly connected, but he did marry a person who had a direct connection with one of my ancestors. So naturally, I needed to verify the information I had available for him. When I glanced at the name of his birthplace, I paused to reflect: Lancaster County, Pennsylvania.

“Well, remember–we saw his house there–and I remember driving up the lane.”

Oh yes, that was an adventurous trip! As I recall, it was the 4th of July weekend during one of the summers we spent in Pennsylvania. We decided to drive across the state to Philadelphia to see the Liberty Bell. As I recall, it was terribly hot that day–but we were out for adventure and elected to make our trip. After jostling around Philadelphia trying to find the Liberty Bell, and then jostling around trying to view it, we headed out of Philadelphia, vowing never to visit the place again! Our trip back to Indiana, Pennsylvania took us through Gettysburg, where we had to stop, of course, and look around. And then we were back on the road.

Lancaster County was beautiful that afternoon. We had never been there, so it was a new experience for us. Then we saw a sign: Home of James Buchanan, Fifteenth President of the United States.

And we saw it sitting at the end of a long, winding drive. Although it was late afternoon, the main gate was still open. Of course, we had to explore. 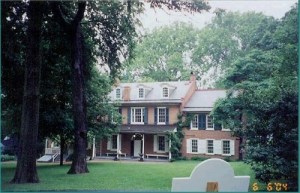 I believe we were the only people there that afternoon. The house was closed and the door was locked, but that didn’t stop us from looking around. I remember thinking how little I knew about James Buchanan, besides his being the President before Lincoln. Some months after our visit there and after our return to Colorado, I discovered that he was the Secretary of State under James Knox Polk. He never married. He was engaged, but his fiance ended her life (I discovered that recently.) After her death, he vowed he would never marry, and he never did. He was a really tall man. I remember seeing a photo of James Knox Polk with members of his cabinet. Buchanan towered over all of them.

Back to the present. After updating my knowledge of President Buchanan late yesterday, I wondered about his connection to William. Of course, everyone has a different opinion about that. Since William is not a direct connection, I won’t unravel all of that in the immediate future. However, given the fact that William was born in Lancaster County, and given the fact that Lancaster County was James Buchanan’s home turf, I suspect there is a “cousin connection” between them.