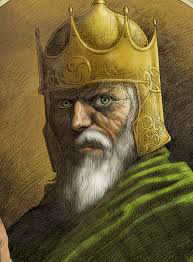 I can’t believe what has happened over the last few days! I’m still in a daze!

I was working with my flowers in the front yard shortly after St. Patrick’s Day when a name suddenly sprang into my mind.

Then, I had to sit back on the grass and reflect upon the name for a few moments.

Why am I thinking of that? I wondered. I hadn’t thought of that name in years! Why now? Why didn’t I think of it on St. Patrick’s Day just a few days ago?

I remembered thinking about Saint Patrick on March 17, but not Brian Boru.

My mind traveled back forty-nine years ago when Howard and I were considering names for the baby we were going to have in August.  We had debated this issue on and off from the day we were engaged.

“How about Ninian!” Howard suggested for his ancestor, Ninian Beall.

“Oh no, we won’t!” I spluttered. “The kids would call him Ninny or Nincompoop!”

[Years later, I told Brian how his father wanted to name him Ninian. His response: “Thank God you steered him away from that one!]

“Well, how about Ryland?” — another Beall name. “We could call him Ryland Hugh Beall!”

“Well, we’re going to have a girl anyway,” I said. “And her name will be Susannah Michele.”

“I’m not so sure I like that one,” Howard responded.

Several weeks after that, we turned our television on and tuned in to a favorite program. The actor’s name? Brian Keith!

“Hey–that’s what we can name our boy!” Howard announced.

“What?” I asked, bracing myself for some outlandish concoction.

My response was almost immediate.

“Then people will call him Brian Boru!”

I only knew two things about Brian Boru back then: One–that he was Irish and, two–that he was a king!

“So–our son will be a king!” Howard decided.

I had to think about it for a while. Shortly after that, I discovered a book on the meaning of names.

I continued thinking about the whole thing, toying with the name in my mind: Brian! Brian! Brian! I didn’t know of any Brians in Howard’s family or mine. So this would be a first!

It is an Irish name! I smiled.

I knew I had some Irish blood in my family, but I didn’t know how much back then. According to a recent Ancestry DNA test, I am 20% Irish, something that would make my ancestors smile. And Howard is 21% Irish!

The name slowly grew on me and pretty soon we were telling everyone, “Well, if we have a boy, his name will be Brian Keith Beall.

Then a problem developed with Keith!

We were living in Louisville, Kentucky at the time, and a neighbor boy had the first name of Keith. Whenever his dad walked down to see us, Keith would tag along with him. He had sticky fingers, and I had to watch him like a dog whenever he was in the house. It wasn’t long before I registered my objection.

“I don’t want our son’s middle name to be Keith!” I told him.

“Because of that kid up the street.” Fortunately, I came prepared. “And I have a perfect replacement!”

“SCOTT! What about BRIAN SCOTT BEALL?”

And that became the baby’s name!

“Brian Boru!” I said softly as I held him in my arms–my nickname for him.“The little Irish king!”

“Have you decided upon a name for this little fellow?” she asked.

“Brian Scott Beall!” I told her.

She stopped writing and glanced down at me.

“Have you been talking with the woman down the hall?” she asked.

“No,” I answered, puzzled. “We decided upon his name a few months ago. Why?”

“The woman down the hall couldn’t decide upon a name for her little boy. She was expecting a girl. We put our heads together and came up with Brian Scott!

So there were two Brian Scotts born about the same time in St. Anthony’s Hospital in Louisville, Kentucky!

The nickname Brian Boru stuck for a while however. Whenever Brian woke up, I would call him that name, and he would grin. But as the years passed and he engaged in mischief from time to time, Boru was replaced with his real middle name:

And I forgot all about the Irish king until a few days ago.

So why am I remembering him now?

I left the yard and returned to the house. Curiosity lured me to the Internet, and I began seeking information about the famous king. The following are selected paragraphs from a Wikipedia article:

Brian mac Cennétig, called Brian Bóruma, Brian Boru, Emperor of the Irish (c. 941–23 April 1014), (English: Brian Boru, Irish: Brian Bórumha or Brian Bóru), was an Irish king who ended the centuries-long domination of the High Kingship of Ireland by the Uí Néill. Building on the achievements of his father, Cennétig mac Lorcain, and brother, Mathgamain, Brian first made himself King of Munster, then subjugated Leinster, making himself ruler of the south of Ireland. The O’Brien Clan regard him as their founder. (1)….

In death, Brian proved to be a greater figure than in life. The court of his great-grandson Muirchertach Ua Briain produced the Cogadh Gaedhel re Gallaibh, a work of near hagiography. The Norse Gaels and Scandinavians too produced works magnifying Brian, among these Njal’s Saga, the Orkneyinga Saga, and the now-lost Brian’s Saga. Brian’s war against Máel Mórda and Sihtric was to be inextricably connected with his complicated marital relations, in particular his marriage to Gormlaith, Máel Mórda’s sister and Sihtric’s mother, who had been in turn the wife of Amlaíb Cuarán‎, king of Dublin and York, then of Máel Sechnaill, and finally of Brian. (2)…

There are many legends concerning how Brian was killed, from dying in a heroic man-to-man combat to being killed by the fleeing Viking mercenary Brodir while praying in his tent at Clontarf…. He is said to be buried in the grounds of St. Patrick’s Cathedral in the city of Armagh. Legend dictates he is buried at the north end of the church. (3)

Brian Boru had four wives. According to the article:

Brian’s first wife was Mór, daughter of the King of Uí Fiachrach Aidne of Connacht. She is said to have been the mother of his sons Murchad, Conchobar and Flann. Later genealogies claimed that these sons left no descendants, although in fact Murchad’s son Tadc is recorded as being killed at Clontarf along with his father and grandfather.

Another wife, Echrad, was a daughter of Carlus mac Ailella, King of Uí Áeda Odba, an obscure branch of the southern Uí Néill. She was the mother of Brian’s son Tadc, whose son Toirdelbach and grandson Muirchertach rivalled Brian in power and fame.

Brian’s most famous marriage was with Gormflaith, sister of Máel Mórda of Leinster. Donnchad, who had his half-brother Tadc killed in 1023 and ruled Munster for 40 years thereafter, was the result of this union.

Brian had a sixth son, Domnall. Although he predeceased his father, Domnall apparently had at least one surviving child, a son whose name is not recorded. Domnall may perhaps have been the son of Brian’s fourth known wife, Dub Choblaig, who died in 1009. She was a daughter of King Cathal mac Conchobar mac Taidg of Connacht.

Brian had at least three daughters, but their mothers are not recorded. Sadb, whose death in 1048 is recorded by the Annals of Innisfallen, was married to Cian, son of Máel Muad mac Brain. Bé Binn was married to the northern Uí Néill king Flaithbertach Ua Néill. A third daughter, Sláine, was married to Brian’s stepson Sihtric of Dublin.

According to Njal’s Saga, he had a foster-son named Kerthialfad.(4)

Now, THIS is the clincher:

The descendants of Brian were known as the Uí Briain (O’Brien) clan, hence the surnames Ó Briain, O’Brien, O’Brian etc. “O” was originally Ó which in turn came from Ua, which means “grandson”, or “descendant” (of a named person). The prefix is often anglicised to O’, using an apostrophe instead of the Irish síneadh fada: “´”. The O’Briens subsequently ranked as one of the chief dynastic families of the country (see Chiefs of the Name).

Brian’s third great-granddaughter was Gwenllian ferch Gruffydd (c. 1097 – 1136), Princess consort of Deheubarth in Wales, leader of the “patriotic revolt” and battle that contributed to the Great Revolt of 1136. (5)

“So where do we go from here?”

The house was empty. I had been pouring over information about Brian Boru for a greater share of the day, interrupting the plans I had already made.

“Wouldn’t it be funny if I find him sitting somewhere in our tree?”

I laughed. For years, I heard my mother-in-law talk about her kings and queens, specifically Robert the Bruce of Scotland. Supposedly, the connection was on her Polk line, but I could never find it. I finally ended up with Fulbert the DePollock (1075-1173), and the accompanying notes:

Fulbert was also known as Fulbert the Saxon.  He was a noble and territorial king who came from Normandy France to England as Chamberlain of William the Conqueror.

***The Saxons were a large group of germanic people. (which would now be eastern Germany and Netherlands) – eventually invaded (or migrated to Great Britain) in the middle ages.(5)

Fulbert’s son was Robert DePollock, but I could find no Robert the Bruce.  At most, the family swore fealty to him and fought for him and named their sons after him. but I do not believe there was any blood relationship. My presumption is supported by the following statement from a Wikipedia article regarding the Pollock name:

Pollok was later divided into Upper and Nether Pollok. It is believed that later Polloks had land confiscated and given to the Maxwell family for supporting Edward I’s puppet “Scottish” king, Edward Balliol, against Robert the Bruce.(6)

[Note: The Polloks and the Maxwells had a “tight fit!”]

And I discovered an item concerning the use of the middle name Bruce with several Robert DePollocks/Polks in my mother-in-law’s line. This is from the Clan Pollock website regarding Robert Pollok/Polk the Immigrant:

The middle name �Bruce� never appears as part of Robert Polke�s name in the colonial records. (This was first introduced in Mary Winder Garrett�s articles on the Pollok/Polk family (1896) and repeated in �Polk Family and Kinsmen.� Unfortunately it has been widely used ever since, but should be omitted.) (7)

There is a connection with Robert the Bruce, on Howard’s father’s Magruder line, however.  Alexander Magruder (b. 1610) and Robert II of Scotland were direct descendants of Charlemagne. So I presume the relationship between the Magruders and Robert the Bruce is collateral and not direct. I’m currently working on these lines and it will take me a while to complete my article on the Magruders.

“Back to my Irish king!” I decided.

That’s when I spotted the O’Brien surname in the paragraphs I posted above, and I started looking for a direct connection. I checked my side of the tree first and came up empty handed. Then I checked Howard’s side of the tree and discovered an O’Brien on his mother’s side of the family–Honor Osborn O’Brien (1645-1701). She married Edward Mariarte (1645-1667). Her father was Brien O’Brien (1610-1665) and her mother was Honor Osborn (1645-1701). Their descent winds down through my mother-in-law Mildred’s Lawrence, Dorsey and Warfield  lines, and straight up through the Briens/O’Briens.

The chase was on!

Yes, we have an Irish king in the family! And he is a direct ancestor!