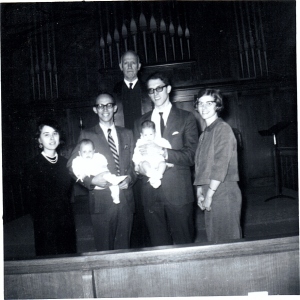 Thanksgiving 1968 was a special one for us. Our son Brian was born August 6, 1968 in Louisville, Kentucky, and his cousin, Kari Jo, was born August 29, 1968 in Wichita, Kansas. We were all scheduled to make a migration to Farmington, Missouri for Thanksgiving that year. One reason? The babies were to be baptized by their grandfather, Rev. Edward L. Beall, Sr. in the Farmington Presbyterian Church. This would be Baby Brian’s first big trip!

Howard was teaching school. It was the day before Thanksgiving, and he was scheduled to be home by mid-afternoon. I spent the morning packing and making certain our dachshund Heidi was taken care of. Howard backed into the driveway–we loaded the car–and then we were on our way to Farmington by way of St. Louis. We were driving a 1967 VW Bug at the time, so we were certainly loaded down. Brian went to sleep, something for which I was grateful!

As I recall, it was cloudy–typical of a November day. We drove across southern Indiana and Illinois, and the rain began in one of those states. It rained lightly at first. I remember stopping at a restaurant somewhere in Illinois where I ordered my favorite breaded pork tenderloin sandwich and onion rings–something I generally don’t get outside of Missouri or Iowa. I laid Brian down in the booth beside me. He smiled at first. Then he decided that (a) he was in a strange place; (b) he was tired; (c) he was hungry–and he YELLED at the top of his lungs. Shoving the rest of the sandwich and onion rings down my throat, I bundled him up and went out to the car so the patrons could eat in peace! Wouldn’t you know it? He was sound asleep the minute I fed him. I sat inside the car, listening to the falling rain, wondering whether this was a foretaste of events that would happen.

And that’s when the drama began!

It was pouring down rain by the time we reached the Missouri River. And halfway across the bridge, our windshield wiper motor died right in the center of the bridge!

Talk about a frightening experience!

By some miracle, we made it across the bridge without incident. But we still had 60 miles to go. The rain was still pelting our car. There was no way we could drive 60 miles in the dark without windshield wipers! Howard called his father, who drove to St. Louis to pick us up. We left our car near a station and headed south to Farmington.

But the drama didn’t end there!

Just as we arrived at the house, Howard’s mother was leaving.

“I have to drive to Potosi!” she told us. “Prince and Cleone broke down there!”

Just then, the phone rang. Prince’s car finally started, so Mildred didn’t have to rescue them. We waited for them to arrive, talked for a while. And we all finally settled down to sleep.

But the drama didn’t end there!

When morning broke, the rain stopped–but it transformed into snow overnight leaving a sheet of ice on everything!

Howard’s brother, Ley, his wife Brenda, and their daughter Carmen were scheduled to fly into St. Louis from Kansas City, Missouri the next morning (Thanksgiving Day). Howard’s mother drove to St. Louis to pick them up, and Howard went with her. He wanted to retrieve his car in St. Louis since we didn’t want to walk back home to Kentucky! They checked on his car first, which was fine. Then they travelled to the airport where they waited–

Finally, they heard the announcement:

All flights from Kansas City have been cancelled!

It seems that earlier that morning, a plane from Kansas City slid on ice on the runway in St. Louis. So they weren’t going to send any more of their planes to St. Louis unless and until the ice has been cleared. Now, I don’t know whether you are acquainted with the relationship between these two cities. There has always been a rivalry between them outside of opposing football teams. We lived in Kansas City in the 1960s before moving to Kentucky, and I remember how that rivalry was so pronounced. It may have moderated since then, but it was really strong at that time. I think it dated back to the Civil War. St. Louis regarded Kansas City as a haven for incorrigible outlaws and Kansas City regarded St. Louis as a haven for eastern Yankee snobs.

[Kansas City didn’t like Kansans (Jayhawkers) either in the 1960s. But that is another story].

“My kids were scheduled to fly in here!” my mother-in-law complained. “How are they supposed to get here?”

“Well, you’ll have to sit down and wait,” she was informed. “They are on their way–by bus!”

“BY BUS! ALL THE WAY ACROSS MISSOURI?”

“I believe that’s the direct route.”

She called to update us on the situation.

“This isn’t fair!” she complained. “I want to be there in Farmington holding my babies, and I have to sit here in this stupid airport all day. Well–we’ll have Thanksgiving when we all get there!”

Six hours later, they all arrived. Howard followed them down in his car, relieved that it was finally safe in Farmington. And once they all stopped talking and settled down at the table–the Thanksgiving feast was tremendous. Everyone enjoyed both the food and the conversation!

Then, when the dishes were out of the way–

“Well, we have to celebrate Christmas!” my Mother-in-Law announced. “You’re all here now, and you won’t be here next month!”

So, out came the tree, the other decorations, and the music. Once the halls were appropriately decked, we had our gift exchange. It was probably after midnight again when we finally ran out of gas! I remember the touch football game in the yard the next day. Then Brenda, Ley and Carmen had to return to Kansas City since Ley had to be at work at TWA that evening.

Sunday was the day of the baptism, the event so conveniently worked into our Thanksgiving-Christmas celebration!

The baptism was a signature event. Howard’s Uncle MacPherson Beall (people called him Mac) and his family drove to Farmington from St. Louis for the occasion. And Clan Beall all descended upon the Farmington Presbyterian Church, sitting in the designated section for honored guests. My father-in-law had been minister at that church for several years, so the gathering was a quite an occasion. Then came the moment of the baptism. Brian’s parents (us) and Kari Jo’s parents (them) journeyed to the front with the babies in tow. What I remember most about the baptism is that Baby Brian recognized his Grandpa Beall and began his little chant: “Da-da-da-da-da-”

We had to have another celebration after all of that!

The MacPherson Bealls went to the house in Farmington as did the rest of the Clan. We had another feast (Thanksgiving leftovers) and plenty of dinner table conversation. Beall table conversations generally turned to politics and other world events. In those days, the conversation focused on Richard Nixon (the newly elected President) and what he planned to do about ending that awful war (Vietnam)–and whether or not Howard’s cousin, Scott, would be called up for duty. He said he expected it; his wife said “No!” (He did serve as a medic. He retired several years ago after many years as a surgeon!)

Our return trip to Kentucky was without mishap or misadventure. Brian slept most of the way. The sun shone brightly and the roads were clear.

And our little dog Heidi was certainly glad to see us!

2 thoughts on “A Special Thanksgiving”