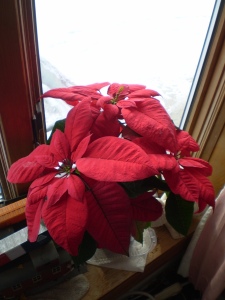 When I saw my pumpkins bouncing down the street in the high wind this morning, I dashed after them. Fortunately, I managed to catch them before they bounced out of my reach, and I returned them to the house. Instead of placing them on the porch again, I took them inside and stored them downstairs. And just before opening the front door, I grabbed the wreathe from the mailbox. It was about to take flight as well.

Thanksgiving is a week from tomorrow. My pumpkins and wreathe were my outside Thanksgiving decorations. They didn’t make it until the holiday. I didn’t want to chase them to Kansas! The interior decorations are still in place. Gradually, I will start moving them downstairs through next week, replacing them with Christmas objects.

Now, if I could just get into the mood!

Christmas is coming, and I don’t feel like it. In the past, I always looked forward to Christmas.  It was my favorite holiday. Christmas almost slipped up on me this year without my realizing it!

2015 has been a year of challenges–the big one centering upon our son’s continued battle with cancer. He was declared cancer-free in May and two months later, his cancer was back. So he has spent the rest of the year undergoing chemo and other treatments fighting the disease. The doctor told him this was something he would have to fight the rest of his life. He has a particularly aggressive form of cancer.  I pray he receives a good report when he undergoes a scan in December.

Howard underwent his cancer treatments in February and March this spring consisting of five days a week for thirty-nine treatments. That was where we met our friend, Rex Swett. I’ve written about him previously. On Valentine’s Day, Rex and his wife appeared at the Cancer Center with small boxes of Valentine candy for everyone. I still have our Valentine boxes. The candy vanished long ago, thanks to the sweet tooth both of us have. I’m still trying to figure out a way to display those boxes. Rex passed away in August. But he became a good friend those short months we knew him. I believe that he knew he had only six months to live when he started his treatments at the center. His wife told me they were trying to think of all the unique things they could do over the next six months. One of his ideas was to take a train trip from east to west across Canada and end up on the West Coast. He didn’t get to do that, but he did make it to his State High School Basketball Hall of Fame Banquet in South Dakota in March. We got together in June for dinner. That is the last time I saw him.

As for me, I really have nothing to complain about. I just underwent my annual “wellness visit”, and it appears that I am fine. Everything seems to be functioning the way these body parts and organs are supposed to be functioning. So I will be writing this blog for a few more years.

I’ve had some wonderful successes with my Ancestry DNA matches. As of today, I think I have around 355. I’m also making headway on some illusive family lines. Finally got my mother’s Spence, Perry and Inman lines in shape! That took a year. Now I’m working on some of my father’s lines. I’m also in 22 DNA Circles. Looked at them today and noticed that membership in those circles is growing. Howard’s DNA matches are also blooming. I took my test last December, so I’ve been receiving matches for almost a year. Got a kit for Howard on Father’s Day, and he has almost caught up with me. But then, his surnames–Beall, Warfield, Polk, Dorsey, DeLashmutt, etc.–are popular. We did find out that we are connected on three lines: Beall, Gaither and Owings. So we are distant cousins.

This blog has taken the place of writing books.  I like the format because as I make future discoveries, I can update the articles. I also have it indexed by the family line I’m writing about, and I have included other topics as well. I can also focus on different family groups from time to time rather than staying focused on just one.

So, this is basically our year to date.

Over the next few days, the interior Thanksgiving decorations will gradually disappear into boxes downstairs, and Christmas decorations will reappear from other boxes. As I put them in place, I will reflect on Christmases past. Perhaps I will add some of those memories to this blog in the form of a Christmas Past–Christmas Present–Christmas Future series.

Now that would get me into the spirit!