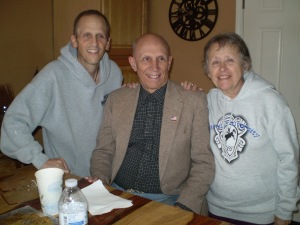 We just learned that Brian’s cancer has returned with a vengeance and are asking for prayers for him. He underwent surgery for esophageal/stomach cancer last October. They were able to get all the cancer they could see. Then he underwent chemotherapy treatments for five months (January-May). That worked as well. They found some cancer cells that were trying to come back and the chemo destroyed them. All looked good.  And now it is back again and he is back at Stage 4 Terminal (where he was last summer).

He was in the hospital all last week–something we didn’t know about. (Our kids have a habit of keeping things secret from us.) Then he needed a ride home on Friday. He had a mass in his kidney–something related to scar tissue from his surgery. They also had to drain off two pounds of liquid from his lung–and they found cancer cells in that.  He was really glad to see me when I opened the door to his room.

So now he is back on the prayer list. He said he as going to need tons of prayers.

Howard’s treatments for prostate cancer proved fruitful this spring. He underwent radiation treatments; the cancer is gone. He just lost a good friend to the dreadful disease this week, but his friend was diagnosed five years ago and did nothing about it. He was a dentist! (What is the old saying that doctors and dentists make the worst patients?) He did nothing about it for five years until he couldn’t walk. Howard met him at the cancer center. Two of a kind, they bonded immediately and their friendship remained strong until the friend passed the other evening. Now, we aren’t prepared to lose our son!

There is a cancer gene in the family–something that was determined when our daughter had breast cancer several years ago. She had a double mastectomy and is on anti-cancer drugs and is doing great.  And now the horrible disease is plaguing our son.

Please keep him in your prayers. We thank you!