When we first decided to spend our anniversary in San Luis, Colorado, Howard suggested traveling Highway 285–a scenic route that would take us through the mountains. We would visit Fairplay and South Park, drive through Nathrop and stop at our favorite rock shop. After listening to the weather the day before our departure, we nixed the 285 plan in favor of I-25. Typical of springtime in the Rockies, snow was in the forecast. So bright and early the morning of April 25th–our anniversary morning–we headed down I-25 in beautiful sunshine. A few clouds were in the sky; the sky was a royal blue.

“Maybe they were wrong about the snow,” I suggested–a suggestion I had often made before and regretted. However this time, I went prepared: snow boots on my feet and my winter jacket on board. “Who knows? Maybe I’ll scare away the snow!”

Since it was a Saturday morning, the traffic on I-25 was not heavy.

We sailed past the Bronco stadium and left Denver quickly. The rock at Castle Rock, Colorado soon appeared on the horizon. 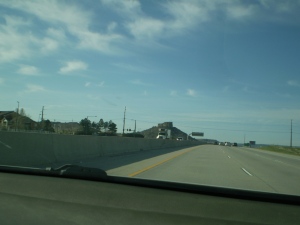 And by late morning, we turned off the interstate onto Highway 160, and headed west to Walsenburg–a town of interest to me. This wasn’t our first visit to Walsenburg, but it was our first since I discovered a family connection there. Established in 1875, Walsenburg became a bustling coal mining town. According to the 1880 Federal Census, my great grand uncle, John Stillians, settled there and went to work in a carpenter’s shop. 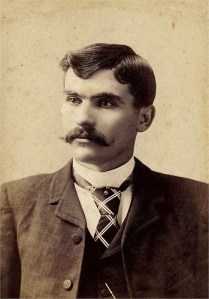 John E. Stillians (1857-1929)–taken in 1886 in Pueblo, Colorado at the time of his marriage to Marianna Augusta Pritchett

John didn’t stay there long. He was back in Iowa by 1881 or 1882, but he returned Colorado in 1886 where he married his first wife Marianna Augusta “Mamie” Pritchett–an actress, singer and dancer–in Pueblo.

The couple relocated to Gainsborough, Florida after their marriage, thereby severing their ties with Colorado. Howard and I had probably been in Walsenburg five or six times before I discovered this connection.

One thing we quickly learned about Huerfano and Costilla Counties on our anniversary trip: most communities there practice a four-day work week. If you have any business to conduct on Friday–forget it. We were in Walsenburg on Saturday. The courthouse was closed. I wasn’t too certain about the mining museum behind the courthouse, however.

Originally the jail, the old building had been converted into a museum. Someone told Howard the museum had closed since “few people are interested in coal mining any more.” I did see a woman unlock the door and disappear inside, but she closed the door behind her. I didn’t inquire and headed up town to find Howard. 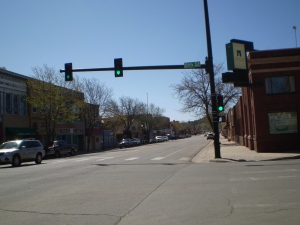 Walsenburg, Colorado on a Saturday morning.

Many of the buildings were for sale. A sad fact about Huerfano and Costilla Counties is that they are the poorest counties in Colorado. We discovered a flea market open, where I acquired a large brown bear I named Walsenburg for the occasion! 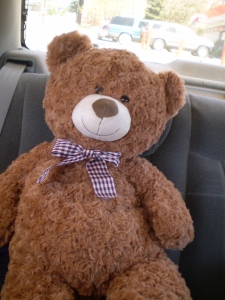 Then we headed up LaVeta Pass on the way to our next adventure. 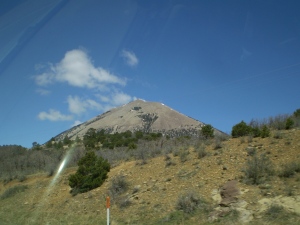 On April 25, 2015, LaVeta Pass basked in radiant sunshine, unlike an earlier adventure there. In December 2007, we had traveled to San Luis to attend a tax sale. While the weather was perfect driving over the mountain that time, it was terrible coming home. We encountered a heavy snow storm, and our car learned how to slide and skate over the pass. Saturday, April 25, 2015 was a different story. Hopefully, the entire trip will be like this, I thought. Once over the pass, we stopped at the base of Mount Blanca where we slowed down so I could take a picture.

I did notice the clouds forming over the mountain!

Fort Garland was our first stop on the other side of the mountain. Howard planned to drive over to Blanca, so we would travel through Fort Garland to get there. That’s where we encountered a unique and interesting family. They were building a store and museum in the shape of an old fort. 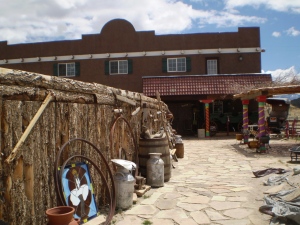 A work in process: a store in the shape and format of a fort! Fort Garland, Colorado

A welcoming committee stepped from the doorway to greet us! 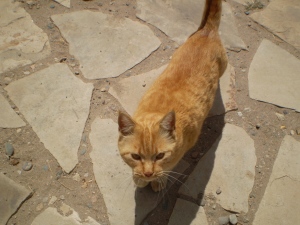 The interior of the store was like stepping back 150 years in time. My collage depicts only a small portion of that experience:

We even saw a parrot at the back of the store–a pet who was 20 years old! (The owner told us they live to be between 80 and 100 years!) The parrot was in a large cage and watched cartoons on television! The owner told us parrots have the mind of a human three-year old! 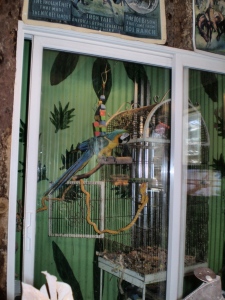 Pet parrot on a perch watching cartoons on a television set!

We left Fort Garland and headed toward Blanca–but not without stopping one more time to take a picture of the mountain.

After the picture, we headed into Blanca for our anniversary feast: dinner at a small café–not as fancy as the place where we ate in Iowa City fifty-one years before, but it suited us just fine! 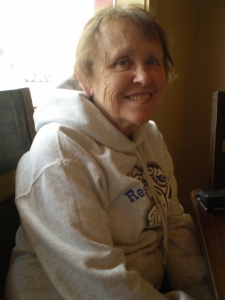 Of course we had to check out the little fudge shop in Blanca afterward!

By then, we were ready to bid Blanca farewell and head over to San Luis–a route that would take us through Fort Garland once again. And when we were back in Fort Garland, we decided to stop at the real Fort Garland that was established there in 1858 where Kit Carson was once a commander. (He was commander there from 1866 until 1867). The following is another collage: 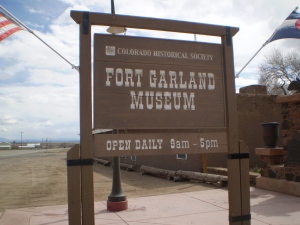 We probably spent about an hour at the Fort, and then we drove on to San Luis, where our Inn and more adventures awaited us.

To be continued in Part Three