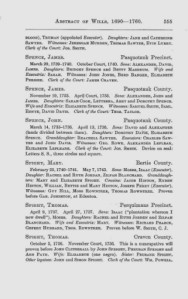 By 1697, John and his brother, Alexander, elected to relocate to Perquimans County, North Carolina. According to North Carolina Colonial and State Records:

–indicating that John and Catherine had their three sons in Maryland prior to relocating to North Carolina. One of those sons is identified in the North Carolina Records:

The names of John and Catherine’s other sons have been gleaned from their father’s will. The daughters were apparently born in North Carolina.

In 1723, John appears as a juror in Pasquotank, North Carolina.(6) The other reference I found for him occurred in 1729, as follows:

Catherine Truman Spence died April 29, 1726 in Pasquotank County. She was the oldest of John Truman’s daughters. John and Catherine’s son, Robert, died before John drew up his will in 1735. The abstract of his will follows:

The children of John Spence and Catherine Truman were:

1. Robert Spence (1690-bef. 14 Mar 1735). Robert is the only child listed on the transportation list to Perquimans, so he was probably the oldest son. He is not mentioned in his father’s will, so he may have died young.

3. David Spence (bef. 1697-1741). David would have been the third son imported into North Carolina by his father in 1697. He is identified in his father’s will and is believed to have died in Pasquotank County in 1741.

John’s will was entered for probate in April 1736. His estate inventory was filed the following year.(10)