I have to admit I have always been an addict! Each time my family would go on a road trip and whenever some historical sign appeared along the road, we always had to stop at my request. That’s exactly what we were doing when I took this photograph of the Battle of Bad Axe sign in Wisconsin. We were satisfying my whim.

Our road trip took place in Fall 1960. My parents’ greatest pleasure was to drive up the Mississippi River when the autumn leaves had peaked and take in their beauty. We took my maternal grandparents with us on this trip–so here we are all standing by the Battle of Bad Axe sign: L-R Oda Elizabeth Hopper Spence (my grandmother); Elva Gail Spence Inman (my mother); William Franklin Spence (my grandfather); Beverly Jeanne Inman (my sister); and Gordon Loren Inman (my father). 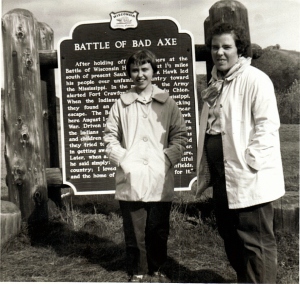 Of course, I had to get into the picture as well! In Fall 1960, I was entering my senior year of high school, so I suppose I was seventeen years old in this picture.

Well, we read the sign and talked about it a while. My grandfather was interested in local history, so he was really glad to have seen it. He had lived so much history himself (i.e. the Dalton brothers shootout in Coffeyville, Kansas in 1890), that something like this was just icing on the cake for him. As I recall, he had to read up on the Battle of Bad Axe and the Black Hawk War after he arrived home, and he talked about it for a while after that. As for me, I put my three pictures in my photo album and forgot all about them–

–until my recent endeavor: the book I am currently writing.

I grew up in Iowa. When I was in school, I did not need to take an Iowa history course. And I didn’t take a course in Iowa history in college. Well, I left Iowa in 1965, returned in 1970 where I completed my degree in English (not in history). Other states lived in include Missouri and Kentucky plus seven summers spent in Pennsylvania. Since 1980, I’ve been a resident of Colorado. So I remember very little about the Black Hawk War and various battles fought within that war.

My recent ancestors arrived in Iowa about the time of the Civil War and later: my Grandmother Spence’s Hopper family arrived in 1858; my Grandfather Inman’s family arrived around 1860; my Grandmother Inman’s Clay and Stillians relatives were in Iowa by 1869; and, my Grandfather Spence did not move to Iowa from Missouri until 1925! So I didn’t think any of my ancestors fought in the Black Hawk War or had anything at all to do with it.

Fast forward to March 2014 and an inscription I discovered on my third great grand uncle’s Find-a-Grave entry:

“Leven Dean was with the Rangers at the time of the Black Hawk War and was also one of the men at the signing of the treaty with the Sac and Fox Indians at Agency, Iowa in 1842. He had lived in Wapello County at the time.”

Leven/Levin Dean’s parents were both deceased by the time he relocated to Missouri from Kentucky. He was raised primarily by his sister and her husband after his father’s death in 1822. His mother died in 1829. Levin was born in Bowling Green, Kentucky in 1814, and he died in Appanoose County, Iowa in 1879. In 1832 when the Black Hawk War erupted, Levin was living with his sister’s family in Randolph County, Missouri. He was eighteen years old when he signed up with the Rangers.

According to a Wikipedia article about these Ranger Units: “During the Black Hawk War, in 1832, the United States Mounted Ranger Battalion was created out of frontiersmen who enlisted for one year and provided their own rifles and horses. The battalion was organized into six companies of 100 men each that was led by Major Henry Dodge. After their enlistment expired there was no creation of a second battalion… Instead, the battalion was reorganized into the 1st Dragoon Regiment.” (“United States Army Rangers,” Wikipedia.com) I have two pictures of Levin Dean. In one, he appears to have used a cane, so he may have sustained some injury in the war.

Levin Dean married Missouri Evans in 1834 in Missouri. As I recall, they were in Macon County for a while. Then he apparently moved to Wapello. Iowa and eventually settled in Appanoose County, which is just above the Missouri Border. He and his family are buried in a cemetery in Unionville.

It is interesting how some old pictures taken over fifty years ago can suddenly spring to life and reconnect in such interesting ways.

Now, I need to make room for the Black Hawk War in the book I am writing!