As a general rule, my front window sill is blanketed with flowers. From September until April or May, two Christmas cactus plants peer through the front glass. They spend the warmer months in the basement where it is cooler. I used to keep them out in the back yard during the summer months, until a cat fight spread one of them across the grass. Since then, they spend the summer in the “Underground.” One of them–the large one–belonged to my mother. Howard gave me the smaller one when it was tiny several years ago. He rescued it from the local super market for $1.00. The flower clerk actually sold him two plants.

“I don’t know whether these two will make it,” she told him. “They need a lot of TLC.”

He brought them home. One–and I forget the name of it–died. The Christmas cactus survived, however. It gets bigger each year.

And my window would not be complete each year without a poinsettia. The current resident–purchased in Walmart’s December 1–is still quite beautiful and happy. The plant will stay in the window until the Easter lily arrives. Then I will move the poinsettia to a different location.

Yesterday after church, we struggled through the ice and snow to head over to Home Depot. Howard is doing a minor plumbing job in our kitchen, and he needed to have a small pipe cut. I elected to go to the King Soopers store next door in search of a couple of items. A table of plants greeted me as I entered the store, and I was instantly drawn to a table of hyacinth plants for sale at $4.99. The table had been covered with them. I stood there looking at the remaining four or five. These little plants consisted of one bulb inside a glass container filled with water. The bulbs each had an amazing root growth, and all of them had the beginning of a hyacinth growing from the top of the bulb. Two of them had great starts in the flowering phase. I chose one of those.

The instructions for keeping my new friend? I had to make sure the water level was 3/4 full. I had to keep it in a cool room. And the room needed a lot of light. So finding the right location in my house was a challenge at first. The plant didn’t like the “underground”–too dark. And it didn’t like the “Gold Room.” Too cold. Besides–I couldn’t see it in those locations. 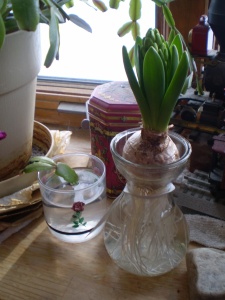 The hyacinth finally ended up in my front window with the two Christmas cactus plants, a tiny version of the larger plant I am trying to root, and the poinsettia plant. After all–it is 1 degree above zero outside this morning, and it was below zero last night–so the “cool” requirement was certainly met in that window.

Can hardly wait for it to bloom!