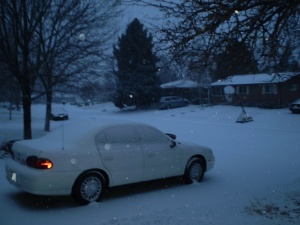 No, we don’t have this much snow this morning–but we do have cold temperatures and a light skiff. After several days of almost 70 degrees, my body needs to readjust to the change. 70 down to 19 is quite a plunge!

We live in the Denver area. Snow events aren’t all that common here around Christmas, although we have had some “big blasters” over the years. One of the most memorable events was the Blizzard of 1982. I was working for a law firm downtown at that time and had ordered a new file cabinet for Howard as his Christmas present. The company was scheduled to deliver it the day before Christmas. However, after listening to blizzard warnings on the radio, I called the company and asked them whether they could deliver it that day.

“Well, I was just thinking that if this blizzard happens, you may not be able to get up the road tomorrow!”

He laughed and laughed. After all, it was 60 degrees. A blizzard? Come on!

The storm blew in that night, and we were snowed in for about a week. I had never seen so much snow! It was nice having a week of vacation, however!

A year or so later, we had a Broncos Blizzard–one of those night games in October when a blaster arrived. Fans turned the stadium steps into slides and were shown sliding down the steps shirtless on national TV. I think they had a little too much Christmas cheer and it wasn’t Christmas! We WON, by the way! Can’t remember which team we were playing, but I think it was one of the California teams.

Since those wild times, we’ve had some storms that topped the Blizzard of ’82. I was still teaching in 2007, and we had reached the end of the semester. It was Finals Week and my last day on campus until late January. The sky was a brilliant red that morning. And the forecast? Heavy snow to arrive sometime that evening!

Well, I went through my usual procedure. Early that morning, I boarded the bus and headed for Denver where I returned papers to students and turned in the grades. As I recall, it was a mild day. Is it really going to snow that hard? I wondered as I left the campus for the bus station. The temperatures were still mild!

The rain started sometime that evening and the next morning, we were buried in snow. I think I heard the other day that December 2007 was one of our greatest snow events over a 24-hour period! And that was the year when we had a blizzard every weekend from December through February–not bad while I was still on vacation. But it was a nightmare when I had to return to campus late January and then deal with it for over a month!

Snow storms just don’t happen around Christmas. March is our snowiest month of the year. I remember March 1990 when I was working for another law firm downtown. The snow started falling when I left the house for the bus, and it fell steadily through the day. I was working in a sky scraper, so I really couldn’t see how bad the storm was becoming. Then at 4:00, our office decided to close–way too late for anyone to get home on time! It took me a half hour struggling on foot to the bus station. Then I had to wait in a mile-long line to get on a bus. With the arrival of each new bus, we inched our way forward and stopped, waiting for the next one. Finally, I boarded a bus and actually found the seat. The bus did not arrive in town until 12:30 the next morning! I had been on the bus since 5:30 the previous afternoon! The driver had to plow through strange streets and byways in order to get us home. Whenever we got stuck in a drift, brave passengers got off the bus to push it.

“Uh, I don’t think we’re going to make it!” one passenger commented.

When the bus finally arrived at the park-and-ride, a number of police jeeps awaited us there. I slid inside one of them beside the deputy driving it–my one and only ride ever in a police vehicle of any kind, and I got to ride on the front seat! He took us to a church, where a lot of busy activity was underway. Those going to Boulder were not going to make it, so the church people were putting up cots. I was only a few blocks away from my house. The snow had stopped falling, and I could walk there safely. As I opened the front door, a chorus of voices greeted me:

“Where in the hell have you been?”

Needless to say, I did not go to work the next day!

Then, of course, we experienced a huge March blizzard in 2002. We had two weeks of spring break that semester–something I didn’t mind. I can’t remember how much snow we got, but I do have pictures of it somewhere in my collection.

Snow on Christmas will be a light event this year. We’ve had temperatures in the 70s. Today it is 19. A light skiff touched the streets and the roof tops. We’re supposed to be cold and dreary. But then our weather will take a sudden swing upward. We will be in the 50s or 60s by Tuesday, with a light snow on Christmas Day!